While militants attack a police station in Wuppertal because of increasing repression in the city and in solidarity with political prisoners, they also took revenge for the brutal attacks from the police on demonstrations for Afrin in the last month. they also announced more actions against SPD, the CDU and Rheinmetall because of their support of the war in Afrin. 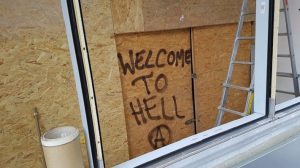