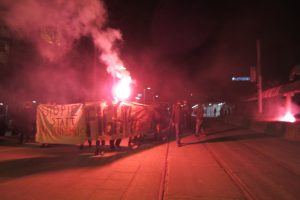 Around 100 people gathered in Vienna on 10 pm to have a 30 minutes long spontaneous, angry and wild demonstration on the international solidarity day for Efrin. The demonstration was an expression of the rage and anger against the occupation of Efrin by NATO, the Turkish
army, IS-fascists and other allies. The front banner said `Fight4Afrin`. Loud slogans were chanted through the streets, like `Biji Berxwedane Efrine`(Long live the Resistance of Efrin`, `Ueberall Efrin, Ueberall
Widerstand` (Everywhere Efrin, Everywhere Resistance), `Solidaritaet heisst Widerstand, Kampf dem Faschismus in jedem Land` (Solidarity means resistance, fighting against fascism in each country) or `Alerta, Alerta
Antifascista`. There was a lot of different pyrotechnic material used. The demonstration caused a lot of attention and left its traces in the neighbourhood, an area that is well known for organized fascists and nationalists from various origins, not only from austria but also many turkish fascist groups. During the demonstration there were several
streets blockaded, repressive and capitalist symbols attacked – shop windows and a police car smashed, glasses of the car shattered. The demonstrators vanished before the cops arrived and as far at is known noone could be arrested by the cowards. The demonstration took place in a part of Vienna were the MHP and AKP are especially strong among the citizens and own and support a lot of
the infrastructure. Therefor it has been an important antifascist action and showed that active solidarity is a powerful step to interconnect the local struggle against fascism in Austria with the international struggles for freedom in rojava and beyond.

To resist means to break the apathy! To witness how comrades are falling everyday in the fight against islamist facist groups, forces us to take action and take our solidarity with the people in northern Syria to the
streets.  We will continue to fight together against fascism in Turkey, northern Syria and Austria everyday! 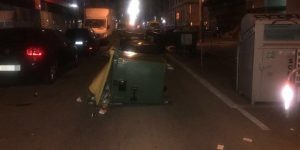