At around 4 am on the morning of April 11th in front of the Unicredit headquarter a rudimentary bomb made with four gas canisters, of camping ones, wrapped in a fabric soaked in flammable liquid, with a fuse to which the fire has been attached exploded. The explosion broke and damaged part of the stained glass window and blackened much of the wall. 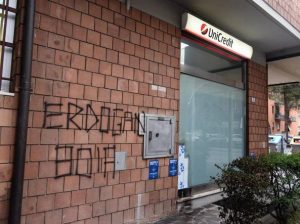